*The Physical Ultrasonics group has a new web page which is linked here.* 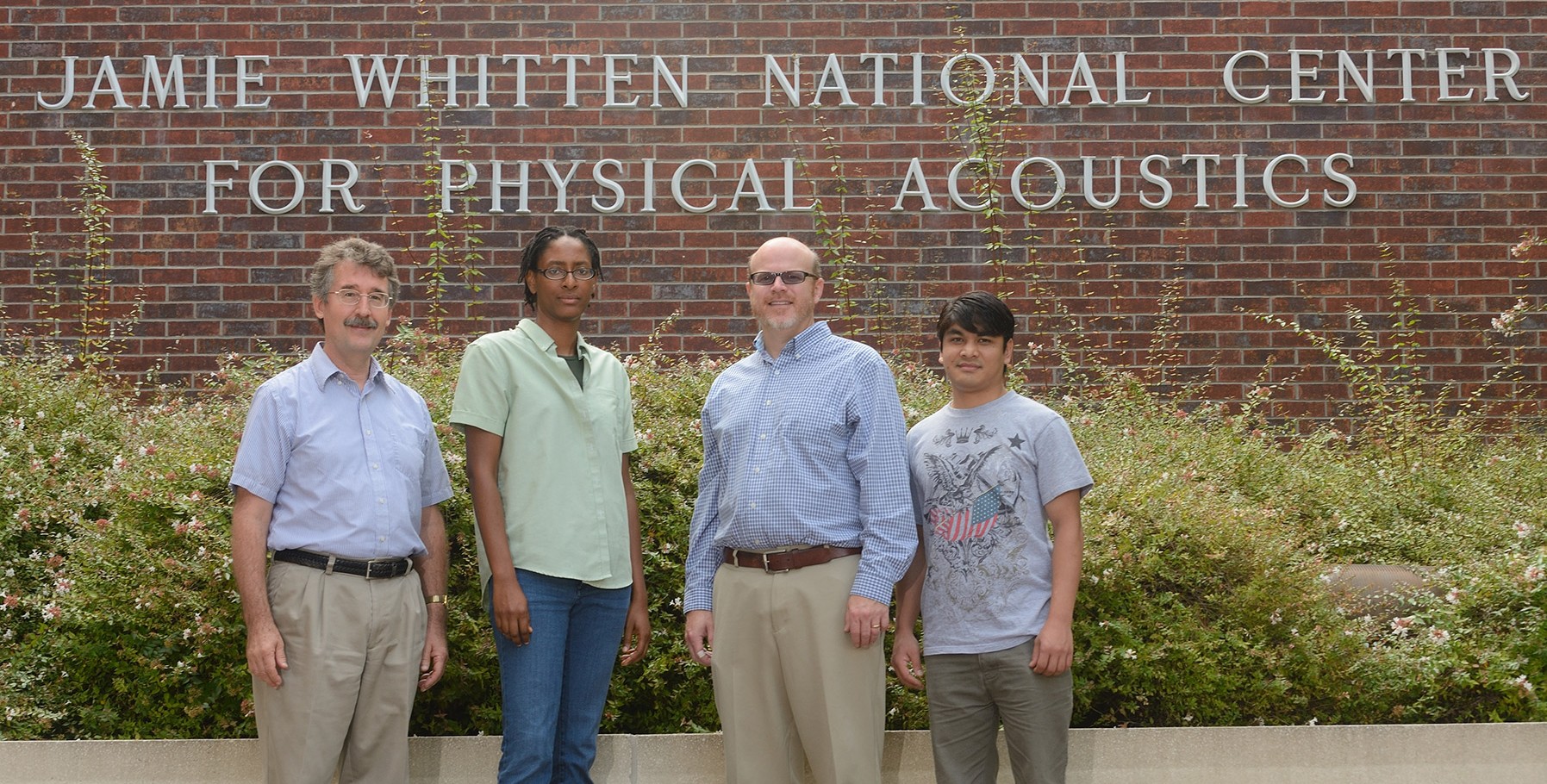 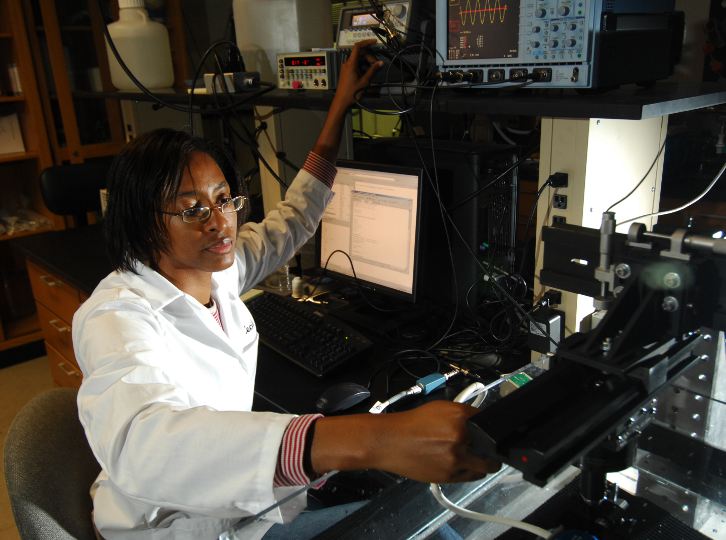 Ultrasound is sound with a frequency higher than humans can detect (greater than 20,000 Hz).  It is often used in both therapeutic and diagnostic medical applications and testing of solid materials and structures.  The Physical Ultrasonics group at NCPA, led by Dr. Joel Mobley, is studying the use of ultrasound to detect and characterize brain trauma.  They have also use high intensity focused ultrasound (HIFU) to focus all the acoustic energy generated by a transducer down to a very small volume.  Much like focusing the suns rays with a magnifying glass, the focused acoustic energy results in a temperature increase which can be used as a medical therapy.  This group also has an interest in the propagation of ultrasound through highly structured media, so called acoustic metamaterials, which can be used to manipulate the intensity of the field over a spatial range using interference effects.  They have also worked with industry and other academics to better understand the physics of high intensity cavitation of bubbles in a liquid driven by intense acoustic fields. Finally, novel ultrasound techniques have been developed for characterizing mechanical properties of novel materials such as carbon nanotube / polymer composites.

The Physical Ultrasonics Research and Engineering Group (formerly the Biomedical Acoustics Group) was formed at NCPA in 2002. The group has two thrusts: the biomedical applications of ultrasound, and the physics of ultrasonically mediated phenomena. In our biomedical work we study the application and associated bioeffects of high-intensity focused ultrasound (HIFU) which can non-invasively drive necrosis in targeted tissues. We are also interested in the bioeffects associated with emerging diagnostic applications of ultrasound, such as radiation-force imaging and elastography. Our physical ultrasonics work includes the fabrication and characterization of phononic metamaterials, signal propagation in heterogeneous and dispersive media, and the physics of acoustic cavitation. Our work has been funded by the Department of Defense, the Department of Energy, and the National Institutes of Health. Our laboratory personnel include three PhD level scientists and a number of graduate and undergraduate students. 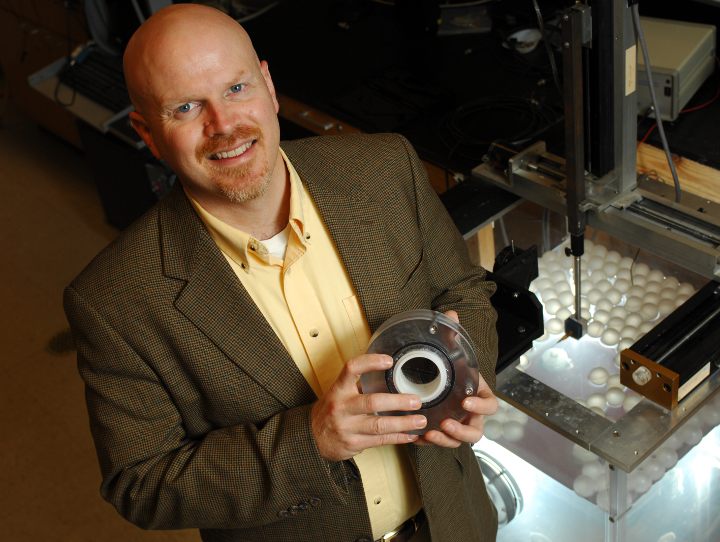 Dr. Joel Mobley received his Ph.D. in Physics in 1998 from Washington University in St. Louis, after earning B.S. degrees in Physics and Mathematics from the University of Kentucky in 1989. For over two decades he has been an active researcher in physical ultrasonics, biomedical acoustics and applied photonics. He is an Associate Professor of Physics and Astronomy at the University of Mississippi, having joined the faculty at U of M in 2005. During the same period he has maintained a laboratory at the National Center for Physical Acoustics at U of M, where he has served as a Group Leader and Research Scientist. Before coming to U of M he served as a staff scientist at the Army Research Laboratory in Adelphi, MD, and completed a post-doctoral fellowship at the Oak Ridge National Laboratory. Dr. Mobley has over 50 publications in scientific journals, and his work has been featured in Scientific American, Technology Review and Physics World magazines. In addition to his hands-on experience in experimental physics, he has worked extensively developing software for data analysis, instrumentation and embedded hardware applications. In 2003 he shared in a R&D-100 award for his role as the chief software architect for the Raman Integrated Tunable Sensor (RAMiTS). Dr. Mobley is a Senior Member of the IEEE, and a full member of the Acoustical Society of America (ASA). He is an associate editor for The Journal of the Acoustical Society of America Express Letters (JASA-EL) with a specialization in ultrasonics, quantum acoustics, and physical effects of sound.

A full publication list can be viewed at https://www.phy.olemiss.edu/UP/papers_mobley.html 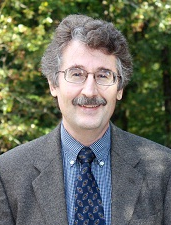 Dr. Charles C. Church (M’02) received the B.S. in physics in 1975 from Westminster College, New Wilmington, PA, and the M.S. and Ph.D. in Radiation Biology in 1978 and 1983, respectively, from the University of Rochester, Rochester, NY.  He has been active in all aspects of biomedical acoustics and ultrasound bioeffects for over 30 years, including theoretical, computational and experimental studies of both thermal and nonthermal mechanisms for induction of adverse biological effects.  He has been a member of either the Bioeffects Committee (BEC) or the Output Standard Subcommittee (OSS), or both, of the American Institute of Ultrasound in Medicine (AIUM) continuously for over 20 years.  Further, Dr. Church has been active in developing safety standards for diagnostic ultrasound with the International Electrotechnical Commission (IEC) for more than a decade, and has recently completed the final draft of a technical report on models for the evaluation of thermal hazard in medical diagnostic ultrasonic fields, future IEC TR 62799.  Previously, Dr. Church was a research scientist at Molecular Biosystems, Inc., San Diego, CA and a principal investigator at Acusphere, Inc., Watertown, MA, where he was involved in the development of ultrasound contrast agents, including preclinical testing and clinical trials.  Since 2002, he has been a senior research scientist at the National Center for Physical Acoustics and a research professor in the Department of Physics and Astronomy at the University of Mississippi, Oxford, MS.  His current research involves safety aspects of elastographic imaging techniques, particularly acoustic radiation force impulse imaging (ARFI imaging or ARFI).  Dr. Church is a Fellow of the AIUM and of the Acoustical Society of America (ASA).  He serves as an associate editor for biomedical acoustics for the Journal of the ASA, as well as the express letters version of that journal, JASA-EL, and Proceedings of Meetings on Acoustics (POMA).

A full publication list can be viewed at https://www.phy.olemiss.edu/UP/papers_church.html