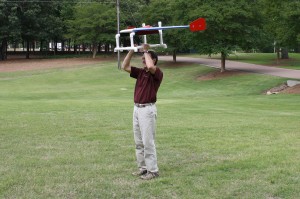 The Applied Acoustics group studies what some would call “traditional” acoustics research: the propagation of audible sound in the atmosphere.  Because the atmosphere is a striated and dynamic medium, sound waves do not travel in a simple straight line – they may bounce off boundary layers and reflect back down to the earth’s surface far from the source or be diverted by wind patterns.  This group studies methods for locating sources of sound in a variety of scenarios: both source and sensors stationary or mobile sensors and stationary targets.  Understanding the propagation path is crucial, but also important are methods for reducing wind noise so these systems are more sensitive to the signals of interest.  This is accomplished using a sensor array and signal processing of the raw acoustic data.  The Applied Acoustics group also has an interest in designing portable air born acoustic arrays.