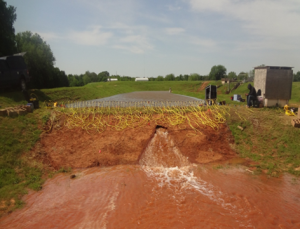 There are nearly one hundred thousand dams documented in the national inventory of dams (NID)  http://geo.usace.army.mil/pgis/f?p=397:5:0::NO

The need for rapid, cost-effective and reliable techniques for surveying these structures to assess their integrity are of paramount importance.

In order to better correlate geophysical anomalies to compromised zones  we conduct seismic and electrical surveys during changes in the internal structure of earthen dams caused by seepage.  These data  are used to develop a geophysical grading system indicating the location of vulnerable zones using cross-plot analysis.

The goal of this research is to develop a better geophysical grading system for locating vulnerable zones within dams and levees.