Standoff Photoacoustic Detection of Solid Residue of Explosives and Other Chemicals 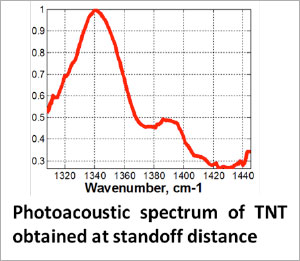 Explosives detection is a very important task for National Security. Detection of trace amounts of explosives has become increasingly important for detection of improvised explosive devices (IEDs), and other terrorist devices.  The most generally accepted methods for detecting trace explosive detect them in the gas phase. Unfortunately, conventional nitro-carbon explosive chemicals have very low vapor pressure that presents a great challenge for their standoff detection.

Photoacoustic (PA) spectroscopy has proven to be a very sensitive technique for the detection of trace amounts of solid chemical compounds. However, traditional PA spectroscopy requires putting a sample in a photoacoustic cell that makes the method unsuitable for standoff applications.

The goal of this research is to develop laser interferometric methods and sensors for sensing PA spectroscopic signatures of trace amounts of solid explosives and other chemicals at a safe standoff distance.